Well, Friday night came & it was time to make fish tacos… and I just didn’t feel like cooking (sometimes pizza just sounds so good!). Plus Matt forgot we were having fish for dinner & had halibut for lunch. So let’s blame him! 😉 Fish tacos have been bumped to tonight, so blog post on those coming tomorrow!

In continuing with the “quick and easy but elegant” theme, last night I made Swedish-Style Turkey Meatballs. For those of you that have been to IKEA and eaten in their food court, you know they have yummy Swedish meatballs (among other things – for an in-store food court, their food is actually super good!). Since I have an odd aversion to buying bagged food and insist on making my own, this recipe sounded good! And it was! My only tip would be if you don’t like how the allspice smells before you put it in, skip it or just put a sprinkle in. I liked the taste, but it was a little over-powering after several bites. Matt wasn’t much of a fan of the meatballs, and I think it was the allspice. This recipe would still be awesome without the allspice – it just gives the meatballs a pop of flavor.  I cut the meatball part of the recipe in half for the 2 of us, but kept the same amounts for the sauce. The sauce was super good, and I served it over egg noodles. I feel like if you added a couple spoonfuls of sour cream into the sauce at the end, you could have more of a stroganoff-style flavor. I’ll be trying that next time for sure! 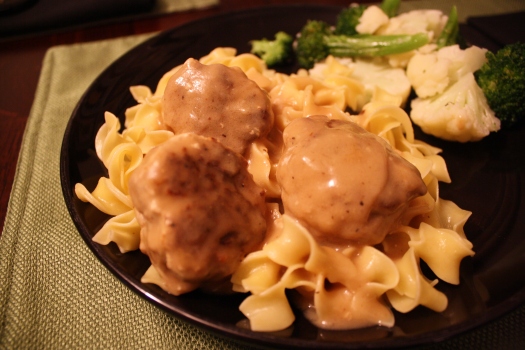 Finely chop the onion. Mix the onion, bread crumbs, turkey, egg, allspice, salt, and black pepper in a bowl. Heat the oil in the skillet for a few minutes over medium heat until it is hot and starts to have little waves in it. Form the turkey mixture into 20 meatballs and place them in the skillet. Cook them for 7-10 minutes or until browned, turning once about halfway through. Remove them from the skillet and set aside.

Start a pan of water. When it comes to a boil, add the egg noodles (amount based on your needs), and cook about 5-6 minutes or until al dente. Drain and stir in a tablespoon of butter or margarine and set aside until your sauce and meatballs are done.

Add flour and butter to the hot skillet after removing the meatballs. Whisk them together to form a paste. Slowly add the broth and cream, stirring constantly. Cook for a couple of minutes until the sauce just begins to thicken and put the meatballs back into the pan. Cover and cook for 10 minutes or until meatballs are done in the center. Serve over the egg noodles and enjoy!

As I mentioned, the sauce with this recipe is really good. We had 2 meatballs left over (halving the recipe gave me about 8 good-sized meatballs), so I smashed them up and stirred them into the sauce. That’s my lunch today!

The cost breakdown on ingredients I didn’t have on hand for this recipe would be: $4 for ground turkey, $2 for beef broth, $2 for whipping cream, $4 for a large bag of egg noodles.  So that’s about $12! Any small ingredients you may not have on hand might bump your total to around $15.  Not bad!  Of course you could use ground beef and it might be a dollar cheaper.  Totally a matter of preference!

If you have any recipe ideas, suggestions, or questions, please don’t hesitate to leave me a comment below!  I love feedback!

One Reply to “Change of plans…”