Let’s just start out by saying – I heart soup. I love the warm, cozy feeling I get when I’m eating it, I love dunking bread in it, I just love it. My second favorite soup in the world is potato soup (most favorite = broccoli cheese). I have another potato soup recipe I will post under the “Favorite Recipes” section later (Mom’s recipe), but I had to blog about a different one because it’s super yummy AND healthy (but totally doesn’t taste like it!). Perfect for those New Year’s resolutions !

There is a yummy restaurant here in Missoula called Jakers. They have a soup there called Baked Potato Soup that is sooo yummy (and probably made with heavy cream, which explains why I sink into a food coma after eating it). I’ve always wanted to recreate it, but just never put forth the effort. A while back, I was going through recipes online and found this recipe called “Loaded Potato Soup” on the Cooking Light website. After reading through the ingredients, I realized I had everything on hand already and decided to try it.

1. Pierce potatoes with a fork or knife. Microwave on HIGH 10 minutes or until tender. Cut in half; cool slightly.

2. After potatoes are done, arrange bacon on a paper towel on a microwave-safe plate. Cover with a paper towel; microwave on HIGH for 4 minutes. Crumble bacon. (OMG! New favorite way to cook bacon! Less greasy, and makes the bacon VERY crispy! Yum!)

3. While potatoes and bacon cook, heat oil in a saucepan over medium-high heat. Add onion; sauté 3 minutes. Add broth. Combine flour and 1/2 cup milk; add to pan with 1 1/2 cups milk. Bring to a boil; stir often. Add the sour cream. Dice up the potatoes (skins and all) and throw them in. (I cut the potatoes into big chunks, but that’s just a matter of preference.) Cook for a couple more minutes, and serve. Top with cheese, green onions, and bacon.

And here’s the finished product! 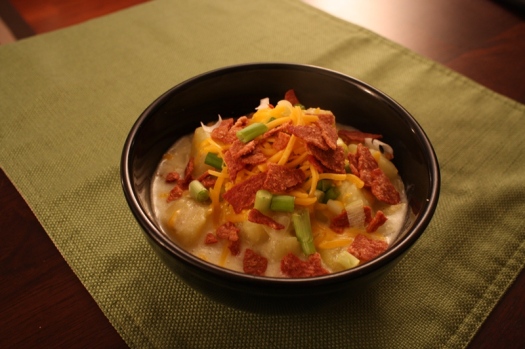 I was honestly a little nervous to try this recipe with all the low-fat, fat-free, reduced fat ingredients. That’s not usually my style. I love Paula Deen just for the simple fact that she starts out her recipes with a stick (or sometimes 2) of butter. This recipe surprised the heck outta me. It honestly tasted exactly like the Baked Potato Soup from Jakers, and was just as filling. If you aren’t someone who buys 1% milk or fat-free sour cream, you could just as easily use whatever you have on hand. Again, it is ALL a matter of preference!

Dish About It! Cancel reply